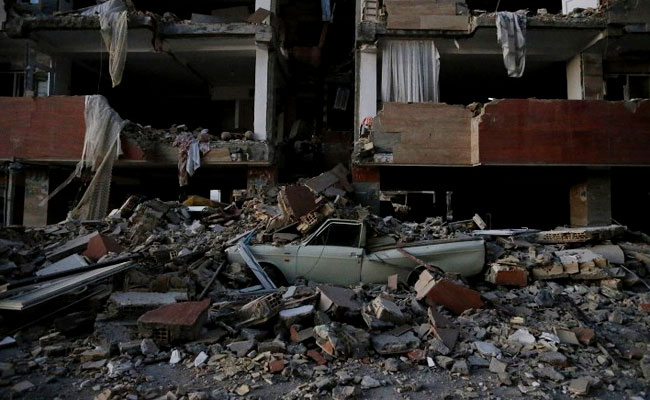 At least 328 people were killed and as many as 2,500 were injured when a 7.3-magnitude earthquake shook the mountainous Iran-Iraq border triggering landslides that hindered rescue efforts, officials said on Monday. Reuters reported that several were trapped under the rubble.

Iran’s state-run news agency said that the country’s death toll in the powerful earthquake on Iran-Iraq border has risen to 328. At least another 2,530 were injured in the quake that hit late Sunday, state television reported the coroner’s office as saying, according to AFP .  The earthquake was felt in several provinces of Iran but the hardest hit province was Kermanshah, which announced three days of mourning. Footage posted on Twitter showed panicked people fleeing a building in Sulaimaniyah, northern Iraq, as windows shattered at the moment the quake struck late Sunday, while images from the nearby town of Darbandikhan showed major walls and concrete structures had collapsed.

Video captures bar patrons fleeing in Sulaymaniyah, Iraq, when a 7.3-magnitude #earthquake struck the city. About 130 people have died in Iraq and across the border in Iran #IraqEarthquake pic.twitter.com/DGhyWjW0AC

We are in the process of setting up three emergency relief camps,” said Mojtaba Nikkerdar, the deputy governor of Iran’s Kermanshah province.

The quake hit 30 kilometres (19 miles) southwest of Halabja in Iraqi Kurdistan at around 9.20 pm, when many people would have been at home, the US Geological Survey said. The Survey added that the epicentre of the quake was in Penjwin in Sulaimaniyah province in the Kurdistan region close to the main border crossing with Iran.

Iran’s emergency services chief Pir Hossein Koolivand said it was “difficult to send rescue teams to the villages because the roads have been cut off… there have been landslides”. The worst-hit towns in Iran were Qasr-e Shirin in Kermanshah and Azgaleh, about 40 kilometres northwest, the official IRNA news agency said.

It added that 30 Red Cross teams had been sent to the quake zone, parts of which had experienced power cuts. In Iraq, officials said the quake had killed six people in Sulaimaniyah province and injured around 150.

In Sulaimaniyah, residents ran out onto the streets and some damage to property was reported, an AFP reporter there said. 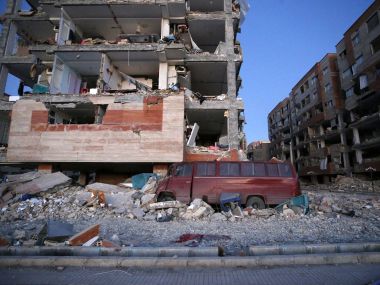 A child and an elderly person were killed in Kalar, according to the director of the hospital in the town about 70 kilometres south of Darbandikhan, and 105 people injured.

The quake, which struck at a relatively shallow depth of 25 kilometres, was felt for about 20 seconds in Baghdad, and for longer in other provinces of Iraq, AFP journalists said.

On the Iranian side of the border, the tremor shook several cities in the west of the country including Tabriz.

It was also felt in southeastern Turkey, “from Malatya to Van”, an AFP correspondent said. In the town of Diyarbakir, residents were reported to have fled their homes.

The quake struck along a 1,500-kilometre fault line between the Arabian and Eurasian tectonic plates, a belt extending through western Iran and into northeastern Iraq.

In 1990, a 7.4-magnitude quake near the Caspian sea in northern Iran killed 40,000 people and left 300,000 more injured and half a million homeless. Within seconds the quake reduced dozens of towns and nearly 2,000 villages to rubble.

Thirteen years later, a catastrophic quake struck the ancient southeast Iranian city of Bam, famed for its mud brick buildings, killing at least 31,000 people and flattening swathes of the city.

Since then, Iran has experienced at least two major quake disasters, one in 2005 that killed more than 600 and another in 2012 that left some 300 dead.