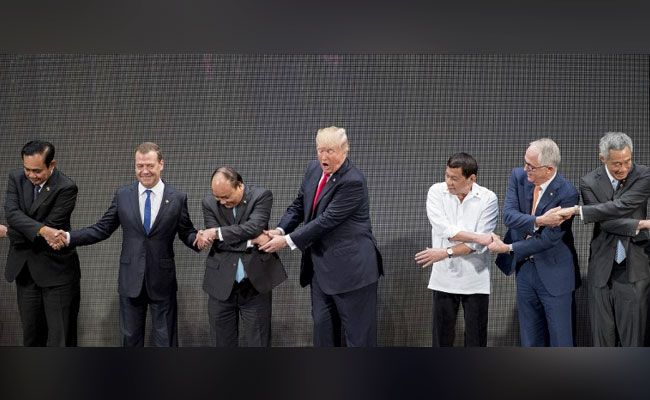 Manila: US president Donald Trump is winding down his lengthy Asia trip with an international summit and a series of meetings with Pacific Rim allies, including his host in the Philippines who is overseeing a bloody drug war.

Trump jointly met on Monday with Australian prime minister Malcolm Turnbull, with whom he had a contentious phone call last winter, and Japanese prime minister Shinzo Abe, who hosted the president in Tokyo earlier in the trip. Trump raved about his accomplishments on his five-nation journey, including on trade and North Korea, but said he would wait until his return to Washington on Wednesday to elaborate with a “major statement.”

“We’ve made some very big steps with regard to trade – far bigger than anything you know,” Trump told reporters at the beginning of the meeting in Manila, touting business deals forged between US and foreign companies. 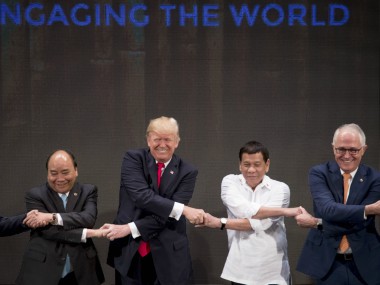 “We’ve made a lot of big progress on trade. We have deficits with almost everybody. Those deficits are going to be cut very quickly and very substantially,” Trump said.

“Except us,” Turnbull chimed in, to laughs.

“You’re the only one,” Trump responded. Trump also said the trip had been “very fruitful” for the United States and pointed to the warm welcomes he had received in capitals like Tokyo, Seoul and Beijing.

“It was red carpet like nobody, I think, has probably ever received,” Trump said. “And that really is a sign of respect, perhaps for me a little, but really for our county. And I’m really proud of that.”

The opening ceremonies of the Association for Southeast Asian Nations (ASEAN) conference began with pageantry, including a group photo of the leaders and the summit’s traditional handshake. That cross-body handshake, during which each leader shakes the opposite hands of those next to him or her, briefly baffled Trump, who then laughed as he figured out where to place his arms.

One of the leaders on his flank: Philippine president Rodrigo Duterte, who has overseen a bloody drug war that has featured extrajudicial killings. The two men are also slated to hold longer, formal talks later on Monday and White House aides signalled that Trump is not expected to publicly bring up human rights in their discussions.

Trump will also meet with Prime Minister Narendra Modi, which plays a key role in the US vision of an Indo-Pacific region that attempts to de-emphasize China’s influence. And he is slated to have dinner with Turnbull.

But swirling questions about Russia followed Trump halfway across the globe.

He tried to have it both ways on the issue of Russian interference in last year’s presidential race, saying he believes both the US intelligence agencies when they say Russia meddled and Putin’s sincerity in claiming that his country did not.

“I believe that he feels that he and Russia did not meddle in the election,” Trump said Sunday in Hanoi, Vietnam.

“As to whether I believe it, I’m with our agencies,” Trump said. “As currently led by fine people, I believe very much in our intelligence agencies.”

But just a day earlier, he had lashed out at the former heads of the US intelligence agencies, dismissing them as “political hacks” and claiming there were plenty of reasons to be suspicious of their findings that Russia meddled to help Trump defeat Democrat Hillary Clinton.

Former CIA director John Brennan, appearing Sunday on CNN’s “State of the Union,” said Trump was deriding them in an attempt to “delegitimise” the intelligence community’s assessment. 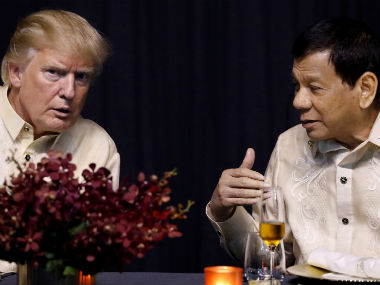 “I think Mr Putin is very clever in terms of playing to Mr Trump’s interest in being flattered. And also I think Mr Trump is, for whatever reason, either intimidated by Mr Putin, afraid of what he could do or what might come out as a result of these investigations,” Brennan said.

“I think he’s giving Putin a pass and I think it demonstrates to Putin that Donald Trump can be played by foreign leaders who are going to appeal to his ego and play upon his insecurities,” Brennan said.

Questions about whether Trump believes the assessment about Russian election-meddling have trailed him since January, when he said for the first time, shortly before taking office, that he accepted that Russia was behind the election-year hacking of Democrats that roiled the White House race.

A special counsel’s examination of potential collusion between Moscow and Trump campaign aides so far has led to indictments against Trump’s former campaign chairman and another top aide for crimes unrelated to the campaign, and a guilty plea from a Trump foreign policy adviser for lying to the FBI.

Trump told reporters traveling with him to Hanoi on Saturday that Putin had again vehemently denied the allegations. The two spoke during an economic conference in Danang, Vietnam. Trump danced around questions about whether he believed Putin but stressed Putin’s denials.

“Every time he sees me, he says: ‘I didn’t do that.’ And I believe — I really believe — that when he tells me that, he means it,” Trump said, arguing that it makes no sense for him to belabour the issue when Russia could help the US on North Korea, Syria and other issues.