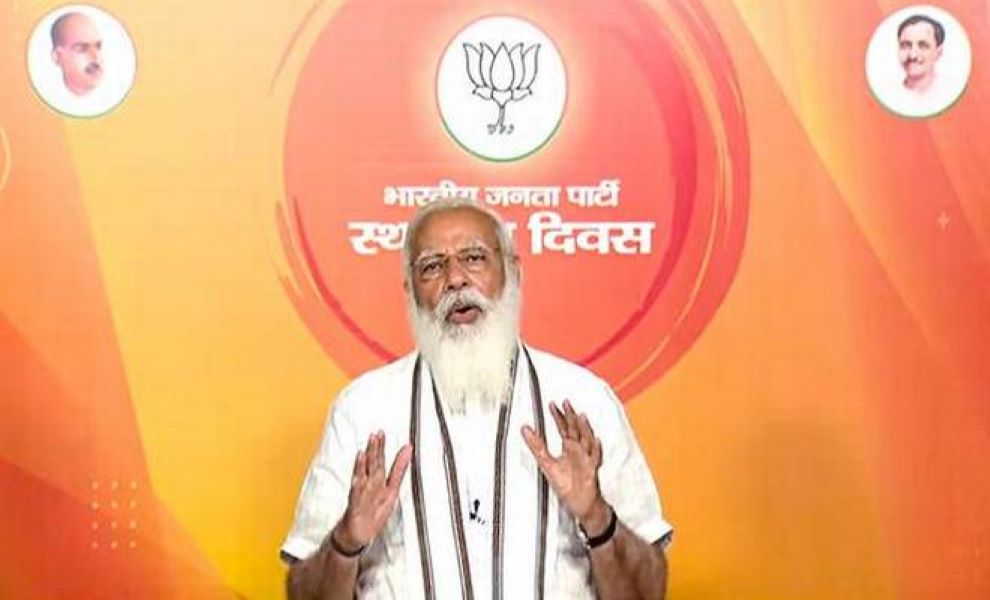 In an address to his party members, Prime Minister Narendra Modi said that to create political instability in the country, ‘false narratives’ are spread by individuals and groups. He (PM) asked the BJP members to stay alert about these rumors and spread awareness amongst the public.

On the occasion of his party’s forty-first foundation day, Modi said that overt lies like – farmers land will be seized, a targeted section’s citizenship will be revoked, scrapping of the reservation or the constitution will be changed – are unfurled as a part of dirty politics.

Discussing the “serious challenge” PM said, “Deliberate politics is behind it. It is a very big conspiracy, and its aims is to trigger political instability in the country by creating misconceptions and stoking imaginary fears.”

Opposition parties have tried to criticize the ruling government on numerous occasions. Spreading these rumors amongst the masses is another attempt to create chaos on laws related to sensitive issues.

Modi rebuked those who tagged BJP as an ‘election-winning machine’, over accusations of double standards and winning streaks in election polls. He further stated that these people have no regard for public’s hope, expectations and dreams. Prime Minister Modi also recapitulated the ‘Nation First’ mantra and Bhartiya Janta Party’s ambitious approach on the concept of “party is bigger than the individual and the nation is bigger than the party.”

“This tradition has continued since Dr Syama Prasad Mookerjee and runs till date,”  he said. Modi also venerated the contributions of Murali Manohar Joshi and Lal Krishna Advani in sculpting and broadening the horizons of BJP.

By nullifying Article 360 of the constitution and bestowing Kashmir with a constitutional right, PM Modi said that the party has done justice to Syama Prasad Mookerjee’s vision of one nation.

BJP has been embraced by the rural population in India for they have seen ‘antyodaya’ which means the welfare of the most deprived for the first time through various measures and schemes of the government.