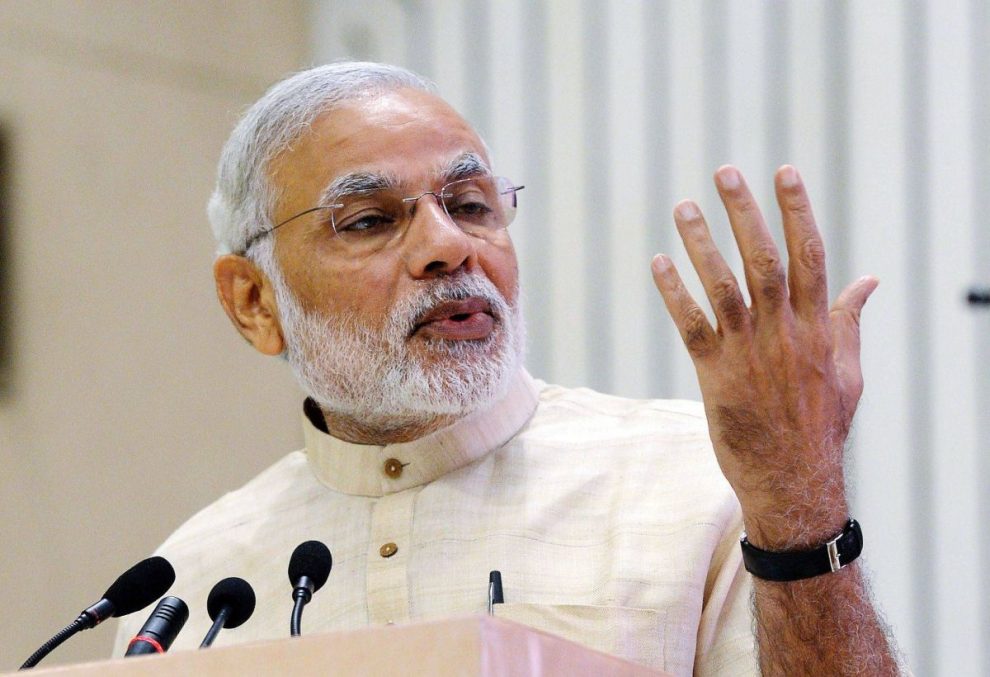 In the hands of a good photographer, the camera would capture Ahmedabad’s Law Garden as something of a paradise. Its lawns are lush green, the pond in the middle has water lilies and lotuses in full bloom. Monkeys jump from one gigantic tree to another, parrots feast on seeds scattered on walking tracks, and birds of different varieties chirrup from dawn to desk. To this fascinating interplay of flora and fauna, the election has contributed a new species — the BJP karyakarta hard selling the only sellable brand in his inventory, Narendra Modi.

Dressed in plain clothes for fear of attracting attention, this party worker silently creeps up on the morning walkers, yoga enthusiasts and students who throng this park. After a brief conversation with his quarry, on finding the audience amenable to his pleas, he flashes a weapon that the BJP hopes will help it win the battle of Gujarat.

The BJP’s weapon of choice in the election is a tablet loaded with messages from Prime Minister Narendra Modi that exhort Gujaratis to vote for him. After a montage of visuals that showcase his past as the Gujarat chief minister and then as the Prime Minister of India, the sales pitch ends with an emotional message: Modi na haath majboot karva chhe.

This karyakarta armed with a tablet and a sentimental plea for strengthening Modi’s hand is the foot soldier the BJP is relying on to win Gujarat. An entire army of workers is leading the charge on the ground as part of its door-to-door, garden-to-garden, mall-to-mall campaign before their leader, Modi, enters the battle to lead the final charge.

Sources claim the palpable anger and resistance to BJP cadre have forced the BJP to issue fresh guidelines to its workers. They have been asked to stay away from large gatherings, approach individuals in smaller groups, go from residential society to society in urban areas accompanied by an office bearer of the residents’ association, politely accept that there might have been a problem with notebandi and GST, and end with the appeal for supporting Modi, arguing that if Gujaratis dump their own idol, how would have change the face of India.

Then, in a smart quip that is both an acceptance of mistakes and an indictment of the opposition, the foot soldiers have been asked to pop a question that forces voters to both laugh and introspect: “Ghoda ni sawari karta tame pari jao, toh shu tame gadheda par chadha sho?” (If you fall while riding a horse, will you mount a donkey?)”

There is a long list of reasons for the BJP’s new strategy and renewed focus on people-to-people contact.

One, Narendra Modi’s successors have failed to nurture his legacy. The current Gujarat chief minister Vijay Ramniklal Rupani is a non-entity in the election. He is seen less as a successor and more as a pretender in contention for the spoils of the victory. In the factional war for supremacy within the state BJP, he is seen just as a leader of a group, instead of the state’s chief minister, a huge letdown from Narendra Modi’s towering image.

Two, there is palpable anger amidst traders, farmers, Patidars, Dalits and youths. For the first time in several years, they have willing to rise above their Gujarati identity that subsumed almost everything. They are now willing to talk about their individual problems and see assert themselves as sub-sections of Gujaratis seeking more jobs, pride and participation.

This anger is reflected in the growing buzz about Rahul Gandhi’s campaign, the swelling crowd at his rallies and refusal of the electorate in many parts of Gujarat to let the BJP workers and leaders argue their case. This has led to something that was unimaginable in Modi’s backyard till a few months ago–the eagerness to listen to Gandhi and resistance to BJP workers and leaders campaigning on the ground. In many villages and residential societies of Gujarat, residents have put up banners asking the BJP to stay away. There have been several incidents of BJP leaders and workers being chased away, not allowed to speak.

The BJP is now hoping that with a one-to-one dialogue, by addressing individual grievances, admitting to errors in private — while, obviously, sticking to its bluster in public — and tugging at the emotional chords of voters by invoking Narendra Modi’s name, it would retain its hold over Gujarat, especially its urban bastions. It thinks the door-to-door dialogue would be the game-changer because the Congress doesn’t have the feet on the ground to counter it. To turn it into a success, it has sent many of its central ministers to Gujarat to lead the infantry charge. On social media, this Modi-centric strategy is being buttressed with campaigns like “I am vikas, I am Gujarat” and “Modi hai na.”

Many people believe that the strategy would ultimately work. This belief is based on the Gujarati mindset that sees Narendra Modi’s rise as a matter of pride and honour for itself and, thus, would think twice before undermining the prime minister in his home state.

But the inherent risk in this Modi-centric strategy is this: If the BJP loses, it would be a rejection of Modi and his acceptance as symbol of Gujarati pride, as well as a not insignificant blow to the party. If that happens, langoors and parrots will continue to create a racket in Ahmedabad’s Law Garden. But the voice of the new species that is competing with them to be heard, will fall silent.

Gujarat elections 2017 pointers: We are readily serving the poor without any lies, says PM Narendra Modi
Why is Narendra Modi silent on linking political donations to Aadhaar when Attack on benamis fine? – Black Money
Comment