The 2017 Brazilian Grand Prix was the first time in the history of Formula 1 when two four-time World Champions lined up on the starting grid — Sebastian Vettel and the newly crowned 2017 Formula 1 World Champion, Lewis Hamilton. For Hamilton, his first qualifying session as a four-time World Champion was a bit of an anti-climax as he ended up in the barriers in Q1 itself. Smartly, Mercedes chose to start Hamilton from the pit lane; allowing them to change everything they wanted on his car and most crucially, avoiding any and benefiting from first corner-opening lap drama that Brazil is usually famous for.

Valtteri Bottas, the man that Mika Hakkinen openly came out in support of during an interaction, clinched a surprise pole position ahead of the faster Ferraris. Bottas’ qualifying performance impressed the Mercedes bosses, but on Race Day, a faster starting Vettel (from P2) took the lead of the race from the first corner itself. After that, for Bottas and Mercedes, it was a race of chasing down Vettel-Ferrari and they almost beat them after an impressive strategy for the first round of pit stops. 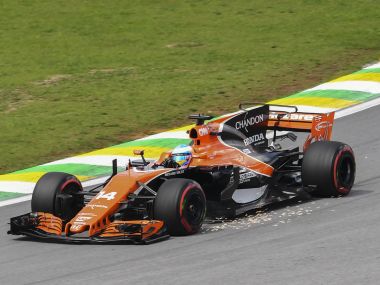 Vettel clinched his 47th Formula 1 career win, strangely only his first win in the second-half of the season — his last win of this season was in Hungary. If only the Hamilton vs Vettel battle promise still played on, the title battle could’ve taken an interesting turn after Hamilton’s 9th in Mexico and charge from the back to 4th in Brazil. However, with the titles now secure with Hamilton-Mercedes, we didn’t mind the World Champion starting at the back and entertaining us with some overtaking moves!

Kimi Raikkonen’s 3rd place finish was the Iceman’s 3rd consecutive podium finish — a feat that last occurred in 2013. Raikkonen drove a good race to finish ahead of Hamilton, who on a late stopping strategy and the Esteban Ocon-Romain Grosjean induced Safety Car period, was trying to race his way to the podium. On most days, a Raikkonen vs Hamilton battle would be a straightforward result. But in Brazil, Raikkonen did well to hold off Hamilton’s charge and keep the last step of the podium.

Hamilton’s charge from the back to the podium was a possible one, especially in Brazil where the track naturally aids overtaking. Despite starting from the pit lane, Hamilton’s late-stopping strategy saw him lead the race for a few laps! As Hamilton closed in on Max Verstappen for 4th place, a battle royale was expected between the two impossible-to-overtake drivers. But thanks to the DRS and the pace differential between the two cars, Verstappen had limited success in holding back Hamilton.

Daniel Ricciardo, who had grid penalties, bore the brunt of the Senna S’ after a Red Bull Racing-Mclaren-Haas sandwich saw him being tagged into a spin with a puncture. However, the Australian, whose 2019 career move is under much discussion, drove well to recover and finish just behind Verstappen. In the last few races, Verstappen’s momentum and finishes does seem to make him appear as the faster of the two.

In the pre-race press conference, Raikkonen joked if Felipe Massa would retire and still make a comeback next year. Massa, who drove his last race at his home circuit for the second time in two years, saw himself finish as the ‘best of the rest’ after a racy weekend all along that saw him battle for honour with former Ferrari team-mate, Fernando Alonso.

The organisers and Liberty Media, who have done well to add the human touch to Formula 1 races, played out Massa’s thank you message (Obrigado Felipe!) on the circuit PA systems. If you would say that they did the same in Mexico with Sergio Perez, they actually went a step further for Massa in Brazil. Post-race, they had Felipinho (Massa’s son) relay a ‘thank you and I am proud of you, Dad’ message to Massa before the father-son duo stood on the podium to thank their fans. The human touch is making Formula 1 seem more accessible and there’s little doubt that the fans love such subtle changes already.

Force India, who have already sealed 4th place in the Constructors’ Championship, had a bitter-sweet weekend with Esteban Ocon registering a DNF (thanks to Grosjean!) and Sergio Perez finishing 9th, behind Alonso (8th) and Massa (7th). While Ocon’s consistent record of race finishes now broken, the team wouldn’t mind actually scoring lesser points in the last two races. The FIA rules mandate that the teams pay an entry fee basis the points scored in the previous season. In Force India’s case, additional points would actually be a burden for the team as it would make their entry into the 2018 Formula 1 Season more expensive. Strange are the ways of the FIA!

In the build up to the race, Renault-Toro Rosso got into a public spat with Renault after the engines that the French manufacturer supply to Red Bull’s B Team have been blowing up more often than not in the last few races. Renault and Toro Rosso, who are locked in an intense battle for 6th place in the Constructors’ Championship, were accused of purposely supplying unreliable engines to aid their challenge. Renault refuted Toro Rosso’s claims, of course. Let’s remember that there are a few tens of millions of dollars at stake for the team that finishes higher in the championship.

While Renault and Toro Rosso will divorce by the end of the season, such possible unfair competition was one of the key reasons why Mclaren’s Ron Dennis was keen to pursue Honda over Mercedes. However, with Renault’s suspicious ways with Toro Rosso over the last few rounds in 2017, could a Red Bull Racing or Mclaren face similar fate in 2018?

Finally, will Formula 1 re-think its engagement with the Brazilian Grand Prix organisers and fans? Hamilton’s crew was held at gunpoint and while no one was injured, this incident reminded everyone of a similar incident with the Buttons a few years ago. If Formula 1 is unable to guarantee the security of its personnel, could we see teams boycotting the race next year if a permanent solution isn’t found? It would be a shame to see Interlagos and Formula 1 part ways because of security issues. This would be an irreplaceable loss on the calendar.