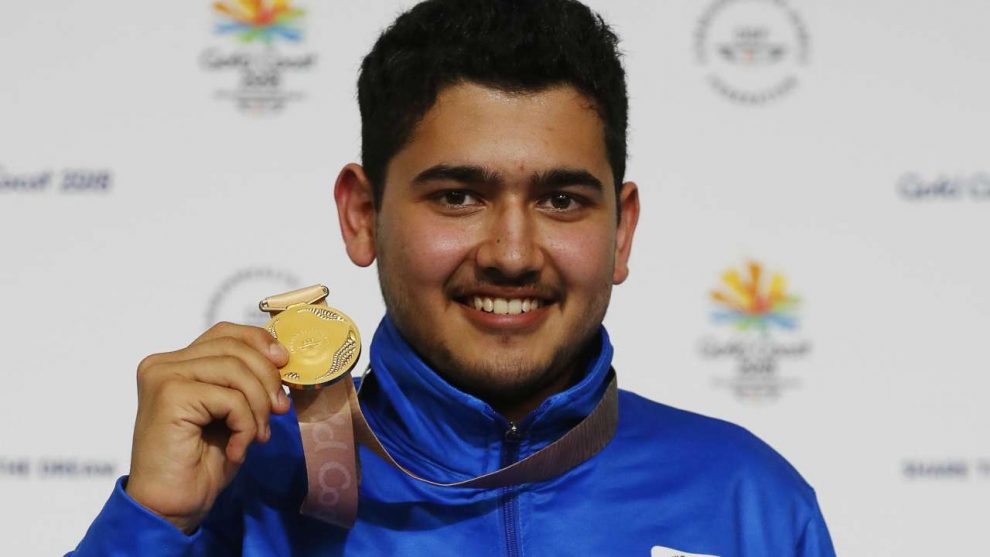 A 15-year-old boy from Karnal, Anish Bhanwala carries dreams greater than his age and won Gold at CWG 2018. He is a son of a lawyer, Jagpal Bhanwala and a homemaker mother, Poonam. He was born in the Kasandi village of Gohana Tehsil, Sonipat, Haryana. A high school student, he is attaining his education from St. Theresa’s Convent Sr. Sec. School, Karnal.

Anish developed a passion for shooting while participating in the modern pentathlon events. His greatest inspiration has been his sister Muskan, who is a national-level shooter. He said, “My sister Muskan is a national-level shooter. After seeing her in the sport, I started shooting. I wanted to be a sportsperson and this was the game I thought would suit me. I like to swim when I am not shooting.”

Despite the family having no background in sports, Anish received immense support from his family. His father borrowed a pistol for him to at a range in a school in Karnal. In 2014, he moved to Delhi in order to practice with the best facilities.

“I didn’t want to leave Karnal but my game forced me to leave the city. Delhi was the place which offered better facilities for a shooter. Staying in Karnal is any day better as the air is cleaner and I have more friends there,” he said.

Taking his passion further, Anish Bhanwala packed his CBSE books alongside his pistol and left for Australia. The passionate young boy missed his board exams in March to participate in the Commonwealth Games 2018, held in Gold Coast, Australia.

Anish Bhanwala made the entire country proud as he entered the six-man men’s 25m rapid fire pistol finals. Shooting a Games record score of 30, he won the finals with two points from a 20-year-old Australian shooter, Sergei Evglevski at CWG 2018.

It was a spotlight moment for him as he won a shooting gold in Gold Coast, and became India’s youngest medal winner at the Commonwealth Games.

After making the country proud with his achievements at CWG 2018, Anish had a pretty calm reaction. He said, “I was under little pressure but in the last series, I scored five out five. So my gold was confirmed. My aim was to improve my score and I did that.”

The teenage pistol sensation trains under an international shooter, Jaspal Rana. Talking about his trainings, he said, “I practise four to five hours daily. Jaspal Rana has taught me discipline. He doesn’t allow any sloppiness during my training sessions.”

As he has achieved what he wished for, the shooting star is now ready for his next project. He is focused on his 10th board exams, which CBSE rescheduled for him.

He said, “The CBSE had, thankfully, rescheduled my exams. I had taken my books to Australia as my exams are back-to-back, that is, April 16th (Hindi), 17th (Social Studies) and 18th (Maths). Since, I’ve brought my books along, I did get some time to study.”

The youngster has his aim clear, that is, to be the world’s best. He said, “My aim is clear. I want to be the best shooter in the world. I have my studies and I will complete it but my focus is on shooting.”

As the country and his family were full of pride with his gold medal at CWG 2018, Anish Bhanwala was especially happy with a bag of chocolates that he received along with it.

For more about latest news about politics, lifestyle and current affairs, visit Storypivot.com