India leaves Adelaide horror behind to bring Aussies to their knees 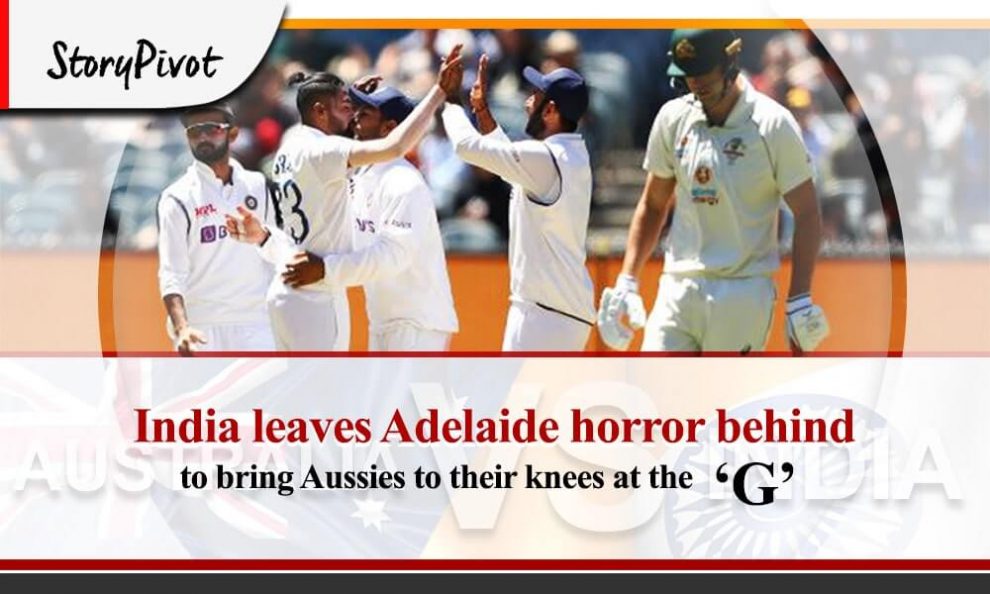 It was only the last week, when India looked down and out at the Adelaide after losing to Australia embarrassingly inside three days of the test match. After bundling out for just 36 runs in their second essay, no one gave India a chance to bounce back at the Melbourne Cricket Ground in the second test. The boxing day test started with Australia winning the toss and electing to bat first. Without captain Kohli, it looked an uphill task for team India to go past the kangaroos on a supposedly batting track.

However, the Aussies started on a tame note and lost 3 wickets for 38 with Bumrah, Siraj and Ashwin accounting for one wicket each. This is when Travis head joined hands with Marnus Labuschagne for 86-run partnership and the hosts seemed to be getting into the groove at the right time. India’s trump card had other plans, as Bumrah accounted for Head to break the crucial stand. The Australian batters started to go down like nine pins without much resistance from the lower order and the innings folded with 195 runs on the board.

India’s reply mirrored the first innings of their counterparts as they lost 3 wickets for 64 runs and seemed to be heading in the same direction. Rahane though had other ideas, as he formed crucial partnerships with Vihari, Pant and Jadeja to take a crucial lead of 131 runs with minimum support from the tail enders. Australia’s second innings again started on a disastrous note, exposing chinks in the armory and they kept losing one wicket after another, as the visitors brought the home team to their knees at 6 for 99.

A rearguard action from Chris Green and Pat Cummins ensured that the match went into the fourth day and India had to bat again to draw level. Australia did recover well to set a target of 70 runs, but the damage was already done on day 3 when their top order was blown away by the tourists in a brief period. India lost a couple of wickets for 19, bringing back the memories of the previous match, before skipper Rahane fittingly hit the winning runs to get over the line, leaving Adelaide horror behind and levelling the series at 1-1.

The action now shifts to Sydney, as the two teams gear up to battle it out to take a lead in the third test. Just like India at the ‘G’, the Aussies will be under the pump in the next game to make a comeback and bring the uncertain summer campaign back on track. It will be interesting to see how things pan out with India riding high on confidence and kangaroos getting a much-needed boost in the shape of David Warner come next week.

India vs Australia test series: Here’s why the new ball may decide the winner!

The world lost an avid sportsman: Duke of Edinburgh
India vs Australia test series: Here’s why the new ball may decide the winner!
Comment