Ola Largest All Women Factory In The world employ over 10,000 women 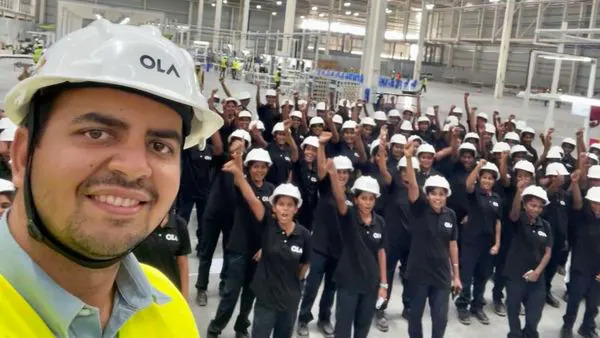 Spread across 500 acres, Ola Futurefactory will employ over 10,000 women once the manufacturing accelerates at full scale. In 2020, Ola announced an investment of Rs 2,400-crore for setting up its first electric scooter factory in Tamil Nadu. Bhavish said that the company would initially begin with a 10 lakh annual production capacity to meet its in-line demand, then expand it up to 20 lakh in the first phase.

Ola Electric had announced that its plants would have an annual capacity of one crore units. Once the factory becomes 100 percent operational, it will contribute 15 percent to the ‘world’s total two-wheeler production.’

Bhavish said, “India’s women will bring the Electric Vehicle revolution from India to the world!” Ola has undertaken this initiative for the first time wherein they aim to create a more inclusive work environment and provide economic opportunities for women on board, Bhavish added.

“When women are equal participants in India’s economic growth, India will lead the world”, he said. Ola founder added that empowering women with economic opportunities not only improves their lives but also their families, and the whole community.

“To turn India into the world’s manufacturing hub, we must prioritize upskilling women and generating employment for them,” he said.

Earlier this month, Ola Electric scooter S1 sale was postponed by a week to September 15 because of some technical difficulties in making the website live for purchases on Wednesday. Ola S1 electric scooter was launched last month in two variants—S1 and S1 Pro—at Rs 99,999 and Rs 1,29,999 respectively (including ex-showroom FAME II subsidy, and excluding state subsidies).