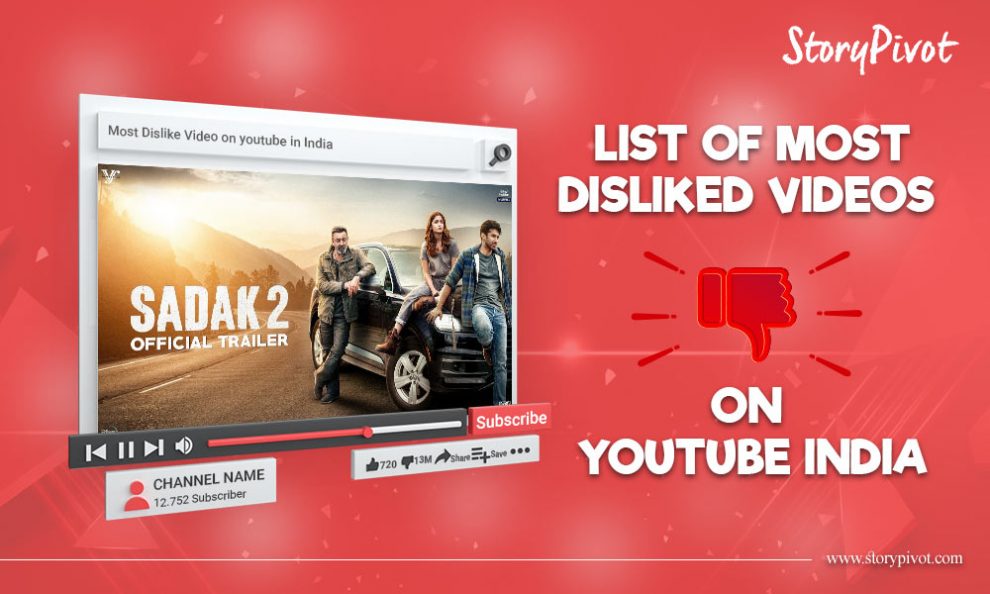 YouTube is a video platform of numbers where likes, shares, and subscribers decide the king of the jungle. Although the constant struggle to become the best promises unlimited entertainment for the users, there are some videos that miss the mark by miles. How do we know this? Here is a list of the most disliked video on youtube India:

India’s YouTube dislikes marvel. The trailer hit the video platform while the country was engulfed with deep debates on nepotism and its role in suppressing the natural talent of actors without a cinema background. People expressed their opinion on the debate with 13.4 million dislikes on the trailer.

In the YouTube vs Tik Tok debate, Mr. Faisu, a famous Tik Tok creator, released a vlog on YouTube featuring his journey in Shillong at a time when the debate was at an all-time high. As expected, the video got 25 million views with 3.72 million dislikes.

Comedian Kunal Kamra made a video on Ajey Nagar (Carryminati) claiming that the latter doesn’t know how to roast people properly. A rather unpolished attempt of memes with commentary to roast arguably one of the biggest content creators in India resulted in 2.46 million dislikes on Kamra’s video.

Another victim of the YouTube-Tik Tok debate, Amir’s reply to Ajey Nagar (Carryminati) became one of the fastest and most disliked video on youtube with over 1.2 million dislikes. After this response, the video was officially taken down by the creator.

While people couldn’t stop appreciating the beauty of Jacqueline Fernandez and Payal Dev’s mesmerizing voice, Badshah brought the opposite perspective in play. With an illogical rap created out of negligible writing effort, the official music video of Genda Phool is only 70,000 short of 1 million dislikes.

Did we miss anything? Let us know in the comments below!