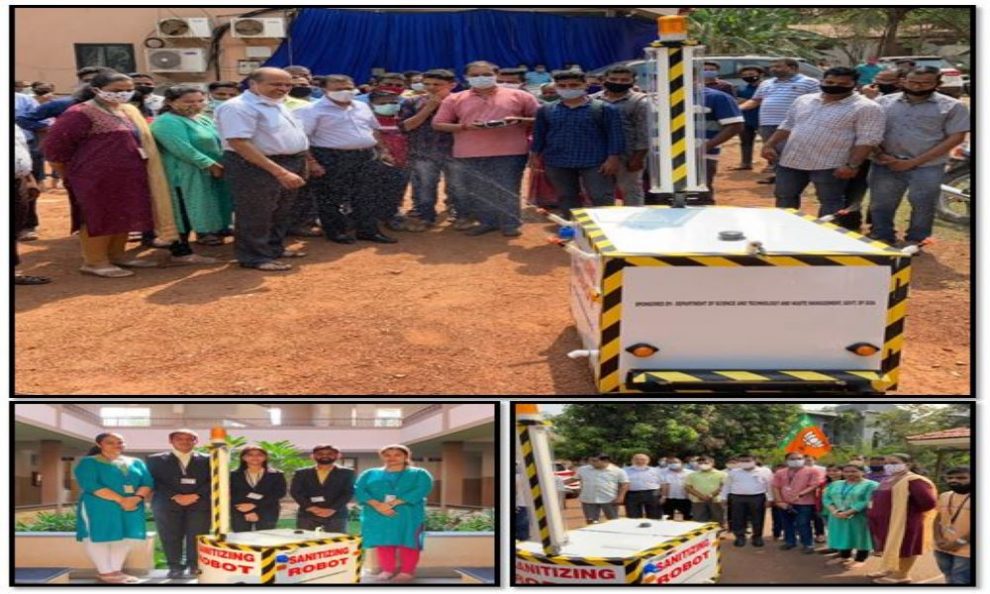 Three final year students at Don Bosco college of engineering, Fatorda, took to their hands the task of developing a sanitizing robot to change the plight of sanitization workers dealing with harmful chemicals.

As a part of their final year project, Vivek Khadilkar, Drasti Naik and Saael Kamat of electronics and communication department, designed a robot that can be operated from a distance of 400 kms.

The trio of engineering students is now planning on getting their design patented. The disinfecting robot is deployed with dual sanitizing technology of spraying chemicals and by using ultraviolet light.

This young innovation has been picked up by the state department of science and technology and the amount spent in building the prototype will be reimbursed to the developers. The prototype cost these students a sum total of INR 95,000, which was designed under the direction and supervision of their professors Michelle Araujo and Mohini Naik.

The officials of the directorate of health services will be receiving a demonstration on the operations of the robot for possible administration. The stated development was approved by chief minister Pramod Sawant and health minister Vishwajit Rane after witnessing the functioning of the automaton.

The design operates on 2 batteries of 12V each. Once fully charged, the robot can work for eight straight hours. The machine carries a tank with a capacity to hold 45 liters of chemical. It has five nozzles for spraying and can cover a range of six meters. That is not all! The device is installed with three tube lights for ultraviolet sanitization, all of them with a caliber of 230 volts and one of them situated below for the purpose of sanitizing floors.

Drasti Naik said that the machine was developed specifically as a remote controlled one and not coded to be fully automatic. This was to make it suitable for different locations and not just be coded according to a particular hospital or location’s layout.

The student’s contribution to fight the pandemic has really turned out to be an innovative one and the team hopes that their development will prove to be handy in sanitizing open markets, closed offices, hospitals and various public places.

Cheers to the frontline workers!