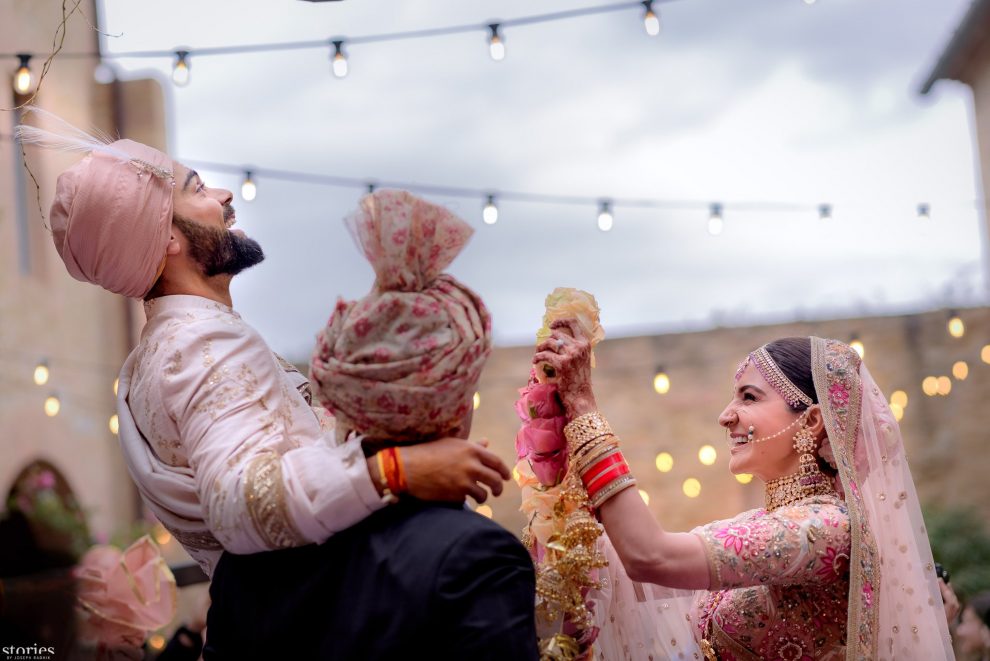 One of the most adorable couples, cricketer Virat Kohli and actress Anushka Sharma tied a knot this Monday. The marriage took place in a hush-hush ceremony in Tuscan heritage resort of Italy.

The news was confirmed by the couple on Twitter by sharing the pictures of their big day.  Both their posts were uploaded with the same caption that read: “Today we have promised each other to be bound in love forever. We are truly blessed to share the news with you. This beautiful day will be made more special with the love and support of our family of fans & well-wishers. Thank you for being such an important part of our journey.”

The couple got married according to Hindu rituals. Anushka and Virat Kohli were dressed in Sabyasachi for all their events. Anushka looked amazing in the pale pink lehenga with silver-gold embroidery. Captain of the Indian cricket team, Virat Kohli, nailed the look in ivory raw silk sherwani, embroidered in a vintage pattern.

Sabyasachi also posted the pictures of the mehendi, of the couple. Anushka is seen wearing a brightly coloured lehenga in pink, orange and teal blue.

The couple has been dating for several years now. They first met each other on the sets of a commercial. People got to know about their relationship when Virat appreciated Anushka’s performance in her movie NH10, on Twitter. They made their first public appearance in October 2014, where the two went to watch an Indian Super League game together.

The relationship of the couple went through a lot of hurdles, but eventually it came out stronger. Virat Kohli is fond of calling her ladylove ‘Nushki’. The love story of this beautiful couple is the favourite of all. The couple is popularly known as ‘Virushka’ and their fans adore them a lot.

Have a Happy Married Life Virushka…