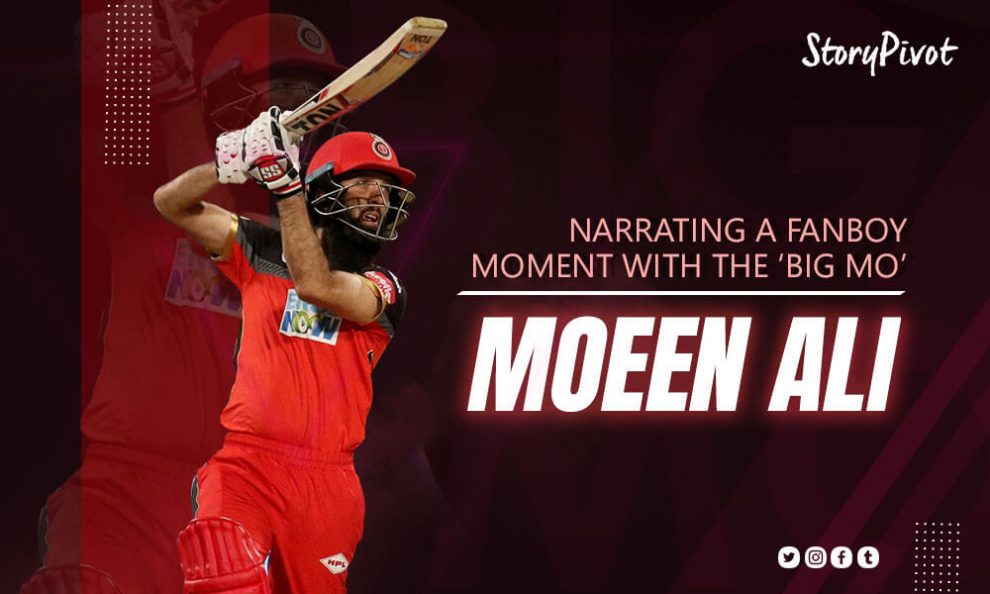 Moeen Ali, one of England’s finest all-rounders, especially in the white ball cricket is a humble individual in the real life as well. Known for his long beard and stern looks, Moeen Ali is not just a talented cricketer, but a role model for a number of youngsters who look towards him to learn the art of balancing personal and professional commitments.

Fortunately, I got a chance to meet the ‘Big Mo’ while he was in Delhi to play for Royal Challengers Bangalore (RCB) in the India Premier League (IPL), just like he is in the RCB 2020 IPL team. I had booked a ticket to watch the riveting contest between Delhi Daredevils and Royal Challengers Bangalore at Arun Jaitley Stadium. My friends were eager to reach early and watch the players closely on the sidelines, and I too agreed, hoping to get a glimpse of Moeen Ali.

On our way to Arun Jaitley Stadium, my friend pointed towards a bus and started screaming the names of players. As soon as I turned my eyes towards the bus, I was fascinated to see the RCB players inside the bus that was running parallel to our car. I looked around and found Moeen Ali sitting next to the window seat. I waved my hand and tried to let him know that his biggest fan was yearning for a reciprocation. My dream soon turned into reality as Moeen put his hand up and waved twice to me and my friends. That’s it! The objective was achieved. My dream was fulfilled. My day was already complete!

A few moments later, the bus was out of our sight and we were left mesmerized with what just happened. But, the hunger to watch our stars perform in front of us had only grown. The players, who just waved at us were about to enthrall us in the playground. Since my friends had booked tickets near the pavilion end, we had more chances of seeing the players closely again.

Three, Two, One and the first ball of the match was bowled in front of a packed stadium as RCB opted to field. Moeen Ali was patrolling the square leg boundary, while we were sitting near the long on. During the course of the innings, I was hoping that the skipper would listen to my heart and send him down to long on. However, in the later part of the innings, he was thankfully asked to field near long on, as he’s considered to be one of the most agile fielders in the side. There was the moment! My favorite cricketer was fielding in front of me, as my friends surrounded me, doing everything to grab the attention of “Big Mo” in between the deliveries.

As the 17th over ended, Moeen turned back, listening to the plea of the fans, who asked for autographs and selfies. I was also amongst the hundreds of spectators who jumped in to touch his hand for a fraction of a second. Moeen extended his arm and touched my fingers, as I watched in awe. I couldn’t believe what just happened and started looking at my fingers and preserving the moments. Did it really happen? I asked myself as I pinched my hand. It was my moment! Indeed, the day couldn’t have ended better.

The riveting contest hardly mattered to me afterwards, as I had struck gold. It was a day to remember for the rest of my life. Everything that I had thought about Moeen Ali was nothing but so true. He really is a champion and a down to earth individual. A person who shies away from the camera, but never shies away from sharing beautiful moments with his fans.